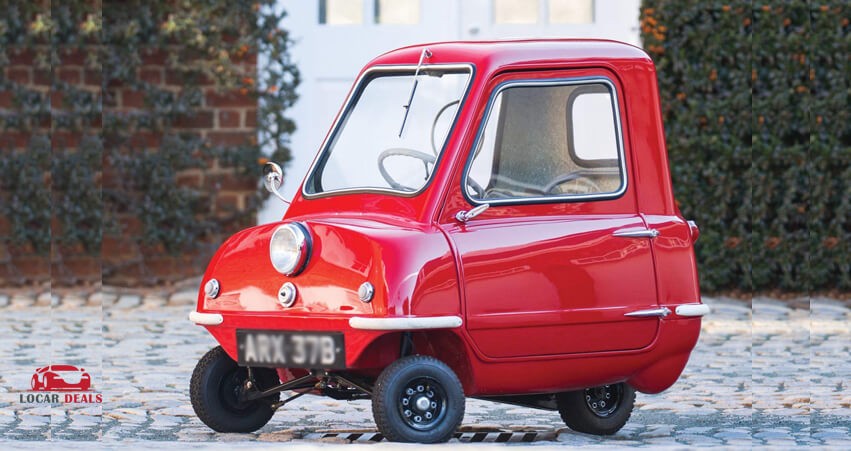 With 2021 at the door, we would think speed is the new best friend of automobiles. However, we still see some of the slowest cars in the world in 2021.

Let’s face the fact that not everyone can afford high-speed supercars like Ferrari, Bugatti, etc. Even many people are not interested in fast cars. They like casual rides that provided comfort and regular speed.

People’s preference for easy-going rides can be a reason why in this high-tech and revolutionized time of technology, companies have still managed to come out with slow-moving rides.

We understand not everyone wants to be a road runner but let’s face it. Nobody likes to look down upon, especially when a thrilling speedy car overtakes you on the road.

Thus, if you are thinking of buying a new car and want to make sure you do not end up with a sloth-like vehicle, you should check out our list of the slowest cars in the world.

When talking about buying a new car, the first question that pops into our minds apart from the pricing is how fast it goes.

Speed has always been a base characteristic for a vehicle’s sales. Not everyone is a speed enthusiast. But still, people prefer a ride that will help them reach places in time.

There was a time when vehicles loaded with high-end features tend to be slow, but not anymore. However, there are still some models that are slower than the others.

We are not saying the vehicles mentioned in our list are inadequate in any way, but if speed is your base turf, then you might want to know which recent launches are faster than the others.

The model is a van and pickup truck launched & used by Hyundai in European export markets.

The 2.5-Liter CRDiIn-Line 4 cylinder engine provides 116 to 170 horsepower, and still, it is not very efficient.

The acceleration time for the vehicle to go from 0 km/hr to 100 km/hr is17.6 seconds, which is very slow.

This 12 seater car with five doors is a good family car if you want an easy getaway from fast-moving life.

But if you are looking for thrill and chase, then this slow car of 2021 should not be on your list.

// Also Read: 9 Best Sleeper Cars In The American Market That You Can Buy

// Also Read: 9 Most Fun Cars To Drive That You Should Check Out

Well, if you are thinking about how fast does a slow car moves, the Russian off-road vehicle Niva Legend is going to be the answer.

The NivaLeged, mainly known as Lada Niva, is a Russian make & model exclusively designed for the raw Russian countryside.

Over the years, the vehicle was exported to the international market. In 2021 the model is redesigned and relaunched by the makers.

The new look is like a facelift for the older design. The vehicle doesn’t impress you much. To be honest, it looks like a Toyota RAV4.

The model comes with a 1.7-liter engine that can barely produce 80 horsepower. It is like the company is still using the old engine of the 1990s.

Niva sure does get a full-time 4-wheel drive system with locking differentials and a low-range gearbox.

It takes 16.2 seconds to go from zero to sixty miles per hour, making it stand among the slowest cars.

The next vehicle on this much-anticipated list of slow-moving cars in the world is Mitsubishi Mirage.

This subcompact car is launched in 2021 with many upgrades. However, the slow speed remains an issue.

With a top speed of 125 miles per hour, the acceleration provided by the vehicle takes twelve seconds to go from zero to sixty miles per hour.

The small 1.2-liter engine is only capable of producing 78 horsepower which is very poor as compared to its rivals.

Do not let the big numbers of mpg (Up to 36 city / 43 highway) fool you as it still doesn’t cut in terms of comfort and thrill in comparison to other subcompacts out in the market.

If there is an unhurried car in the world today that is all about the show but no go, then Toyota C-HR is the one.

The Toyota C-HR is an SUV that is designed to provide high fuel efficiency instead of satisfying speed or gracious handling.

The vehicle is without a doubt the sportiest looking car in its category in 2021. But its acceleration of 11 seconds to reach sixty miles per hour is disappointing.

The weak engine that powers only 144 horsepower, unavailability with all-wheel drive, and limited cabin space make it a much worse choice to buy.

The next tortoise car in the world is Ford EcoSport. Ford is well known for its extravagant rides.

However, EcoSport is a big disappointment by the company on many ends. The vehicle takes 10.7 seconds to reach an acceleration of sixty miles per hour from zero.

Not only this, the subcompact SUV suffers from an underpowered engine, uncomfortable ride, and restricted safety features.

166 horsepower is not good enough to cover up the problems that this vehicle is facing. The cramped-up interior, low mpg make it look worse apart from the speed issue.

The only thing in which the Ford Ecosport does not disappoint is its decent-looking exterior.

Another slow engineering vehicle that you should know about is the 2021 Fors Transit Connect. The Transit Connect is not the most refined automobile out there but is a good choice for people who sell goods.

The vehicle takes 10.5 seconds to achieve an acceleration of sixty miles per hour. Not only this, the van is said to accommodate almost five people leaving the space crowded.

The buyers get two engine choices that can power up to 169 hp. If you are looking for a vehicle to move things, then this vehicle can work. However, if you want a passenger ride, Transit ain’t worth it.

The final car on this list of the slowest cars in the world 2021 is the 2021 Toyota Corolla Hybrid.

Seeing a Toyota in the list of slowest cars is quite shocking, but we can’t move our eyes away from the truth. Despite the good looks and good fuel economy, the vehicle struggles in its speed section.

The hybrid takes 10.3 seconds to achieve its basic acceleration of zero to sixty miles per hour.

Apart from this, this compact car struggles to get up to highway speeds which is very disappointing for a ride in this class.

The weak 1.8 L 4-cylinder produces a mere 121 horsepower making it look like a turtle on the road.

What is the Slowest Car in the World of all time?

Now that you are familiar with the slowest cars in the world in 2021, we thought why not make things a little more interesting.

The vehicles mentioned above are the slowest cars of the current year only. However, some vehicles hold the title for being the complete opposite of the fastest cars in the world.

Below we have prepared a list of the slowest cars in the world of all time which you might enjoy reading.

The list describes top speed as some of these cars can’t even reach the acceleration of 0-60 miles per hour.

FAQ – Slowest Cars in the World

– What is the slowest car in the world and how fast does it go?

The world’s slowest car is said to be Peel P50. This two-seater small car has a top speed of mere 30 miles per hour.

With the different vehicles that launched in 2020, the Volkswagen Up is the slowest car of the year.

The car takes 15.6 seconds to reach an acceleration of sixty miles per hour.

– Does the slowest car in the world contain anything (build materials) with a Bugatti?

The slowest car in the world is Peel P50. The car first launched in 192 and was produced until 1965 by the maker Peel Engineering Company.

When it comes to comparing this old vehicle with the models of Bugatti, a company known for its class and innovations for over a century, I don’t think there is any similar build material in Peel P50 to that of Bugatti.

There might be a slight possibility that the vehicles that Bugatti produced in those early years, the rubber used by both the companies might be similar.

Other than that, there is not a remote possibility of any similarity.

Check out this list of the top seven fastest cars (from the bottom) in the world in 2021:

– How fast can the slowest car in the world go?

The slowest vehicle in the world is Peel P50, and it can go at a top speed of 30 miles per hour.

– What is the slowest car (0-60 and top speed) Sold in the US market in modern times?

In modern times the slowest automobile sold in the US market is the 2020 Volkswagen Up. The vehicle takes 15.6 seconds to go from zero to sixty miles per hour.

– What are the top seven slowest cars in the world, what are their characteristics?

Below is the list of the seven slowest cars in the world of all time.

This is the list of the top seven slowest car in the world.

Speed is the base measure for any vehicle of any brand to make it big in sales. Outlook, comfort, technology, and safety features sure to play a vital role but sometimes how fast a ride can take you is more important.

To make sure you do not end up with a slow-moving car this year, we prepared this list of seven slowest cars in the world in 2021.

We hope the list helps you with your purchase and knowledge enhancement. If you have any queries or suggestions for us, please mention them in the comments below.