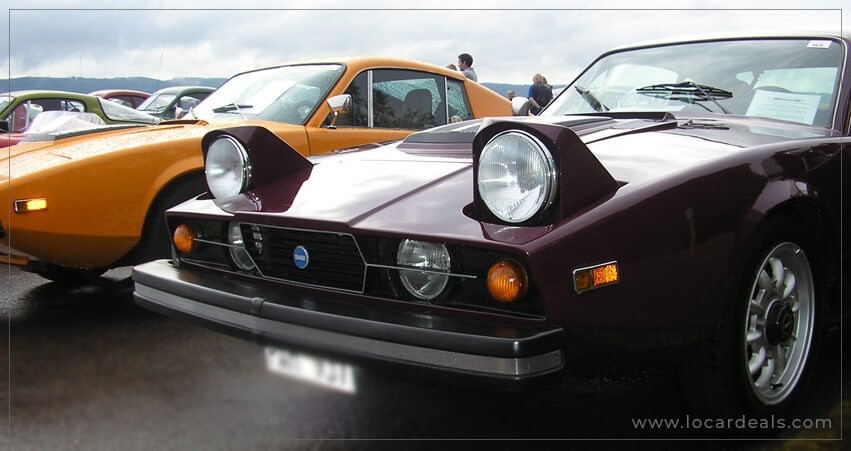 Cars with pop-up headlights are among some of the top crazy innovations that the automobile industry saw since its beginning.

One might not be able to easily find new cars with flip-eye headlamps. But if you are interested, there are some eye-catching models from the past that are worth looking at.

Pop headlights is a retro idea, but it became highly popular in the 1960s and 70s. The last cars made with pop-up headlights were in the year 2004.

Since then, there are no automobiles out on the road that comes with this unique feature. However, if you are interested, today we have the list of the 9 most stunning cars that featured pop-up headlamps.

Cars with Pop Up Headlights Overview

The 1980s and 1990s were the peak period for cars with pop-up headlights. However, there were many flaws associated with it which led to halting in their production.

The Lotus Esprit and C5 Chevrolet Corvette were the last cars with pop-up lights that came out in 2004.

Below is the best car list with pop-up headlights for you to explore.

With the advancement in technology, enhancements in vehicles are common. Some trends tend to live longer, while some vanish in the thin air without any trace.

The first car on this list of top picks of automobiles with pop-up headlamps is one of the last production of the trend, the Chevrolet Corvette.

Chevrolet Corvette holds the record for being the longest-running model that featured pop up headlights.

This two-seater car with a streamlined hood and convertible head made it one of the best & comfortable models to drive. The C5 was the final model of Corvette that came with popped-up headlights in 2004, showing the end of an era.

Lotus Elan was another last car with pop-up headlights. It was one of the cheapest models of Lotus at that time.

There is no harm if you refer to it as one of the cheap cars with pop-up lights.

The car was referred to as a little sports car because of its tiny outlook. The vehicle had a 1.6-liter turbocharged Isuzu front engine that could produce up to 160bhp.

I know it does not sound glorious, but it was enough for a car with such a build.

The next car on our list of cars with pop up headlights is Mazda Miata. The Mazda Miata (NA) was one of the most popular roadsters that featured headlights that pop up.

The model was in production for 8 years until it was replaced in 1998 by Miata NB. This small roadster redefined the definition of the small roadster.

Of all the vehicles mentioned in this list, the first generation of Mazda Miata is probably the one that you would see on the road even today.

If you are looking for supercars with pop-up lights, then Lamborghini Miura is the one for you.

The car is referred to as the pioneer of mid-engine layouts which was to be used by vehicles for many years after it.

If looks and quality were the preference, this supercar fits in all those norms perfectly. Although the speed of the vehicle was not so impressive, it sure came with many fancy features.

The pop-up headlights that weren’t concealed were one of them.

Being one of the most affordable supercars of its time, Acura NSX is the next car on our list.

Acura NSX was one of the most stylish cars to come with pop-up headlights features. The first generation of the vehicle was highly loved by the people. If a mid-engine car with high-end looks was a person’s priority from 1990 through 2001, this was the car for them.

Another car with pop-up headlight that could be seen on the roads from 1978-1995 is none other than Porsche 948.

The pop-up headlamps were an integral part of the model, and it is next to impossible to imagine 948 without them.

The car had round headlamps with a frog-eyed look that made it impossible to miss it on the streets.

Another supercar with pop up headlights that you cannot afford to miss is Ferrari Testarossa.

The vehicle was marketed from 1984 to 1991 with a mid-mounted 4.9-liter flat-12 engine. The low sleek design goes well with the pop-ups and gives it an attractive look.

The stylish exterior, elegance, and class are the things that we look for in a ride, and Buick Y-Job was a combination of all three.

This retro car of 1938 is said to be the first true concept car. The headlights that pop up were one of many worth waiting features of this dream car.

The last car on this list of cheap cars with pop-up lights is Cord 810, the first car to implement them.

This 1936-1937 model is known for its various exceptional facts. Apart from being the first automobile to have pop-up headlamps, it was the first American motor vehicle with a front-engine and front-wheel-drive layout.

This early model didn’t survive, but it became an inspiration for many models to come.

Pop-up headlights cars are the news of the past. You might not see them on the road, but that doesn’t mean you can’t learn about them or even better find a used one.

Here we have a list of 7 cheap cars with pop-up headlights.

Yes, Popup headlights are legal but to make them under the government’s laws & regulations of manufacturing can be expensive, which is why they are no longer made.

The new safety regulations of roads somehow are responsible for the no longer usage of pop-up headlights in automobiles.

Why are pop-up headlights bad?

Technically speaking, pop-up headlights are not bad, but they are not feasible either. They do not go well with the new universal safety regulations.

Not only this, pop-up headlights are bad for aero. Using them frequently will eventually decrease your fuel efficiency.

Also, adding them into a car adds high value to a vehicle’s cost which somehow doesn’t seem worth it.

Are pop-up headlights illegal in the USA?

Owning cars with pop-up headlights is not illegal in the USA. As long as your car meets the government-suggested regulations, you can drive your car with popping up headlamps on the road.

Finding new cars with pop-up headlights in today’s time is next to impossible. The feature is said to be one of the most attractive ones, but it had its shortcomings.

Despite being discontinued, cars with pop-up lights still attract attention. To quench your thirst for learning about automobiles that come with this feature, we have this detailed list prepared for you.

GR86 Most Popular New Toyota Sports Cars 2023 Has To Offer