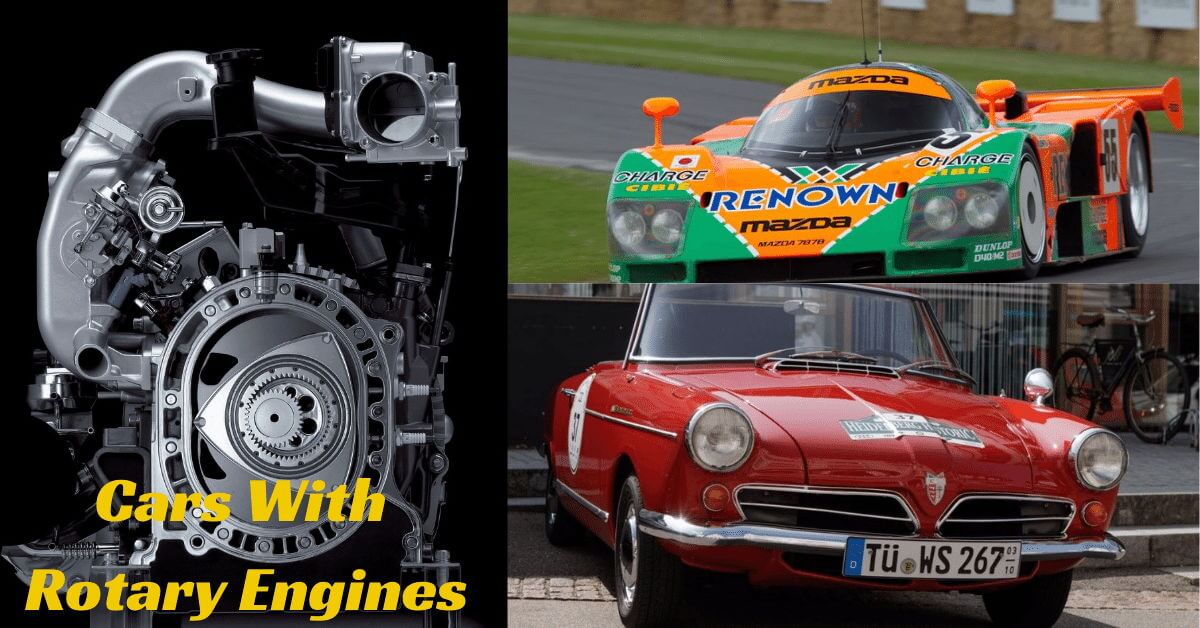 Mazda, one of the leading Japanese car brands, returns with a rotary engine in the Mazda MX30. Some buyers are unfamiliar with this type of older engine. To introduce you to this unique engine, today we show the best cars with rotary engines.

The Wankel engine is based on an eccentric rotary design that converts pressure into rotary motion. In this way, it is called a rotary engine. Mazda was one of the first companies to use a rotary engine in a production vehicle.

It all started in 1961 when the Japanese automaker signed a contract with the German automaker NSU to develop the Wanker engine for passenger cars. The Spider was the first rotary-engine car developed by NSU.

After that, Mazda made many vehicles with rotary engines, which we will see in the last section of the article. Rotary cars became famous in the United States in 1970.

In the United States alone, about 100,000 rotary-powered cars were sold in 1972, and for the remainder of that decade, half of Mazda’s automobile production was rotary drive. Here we are going to share with you remarkable cars with rotary engines and everything about them.

What Cars Have Rotary Engines?

Although not common in modern automobiles, rotary engines offer a drastically different alternative to traditional reciprocating internal combustion engines. There are many benefits of using this rotary engine.

It is the most reliable and powerful form of engine and Mazda uses rotary engines in many of its cars. Here is our list of 9 affordable cars with rotary engines that will make you a fan of them.

Top Advantages Of A Rotary Engine In the Cars

It is important to remember that not all rotary engines are the same as radial engines. Most Rotaries are made with an odd number of cylinders. This design allowed all the pistons to fire in the correct order, allowing for smooth operation.

There are still some benefits of the rotary engine cars to consider today, although this technology is rarely used. We will discuss some of them here.

A rotary engine uses fewer parts as compared to a piston engine. This can reduce design and manufacturing costs. This also leads to weight loss

This engine does not contain valves, rocker arms, toothed belts, camshafts, or flywheels. All of this means less weight, fewer opportunities for malfunction, and easier repair.

Suggestion For Reading: 11 luxurious Cars With Butterfly Doors – Give Them Adorable Look

Rotary engines are much less likely to malfunction. This means that airplanes are still using this technology, as it gives the pilot the ability to land safely even if the engine fails.

Sports and cars use this technology for the same reason as it operates at high RPM and produces more power for a shorter time compared to today’s modern internal combustion engines.

When a rotary engine is running, the rotating cylinder and crankcase assembly itself creates a cooler flow of air. The rotation acts like a self-cooling fan that draws cooler outside air into the compartment.

This benefit also applies when the vehicle is idle. Since the internal combustion engine does not operate in high-temperature conditions, there is less risk of overheating or damage.

Although the size of a rotary engine is small in a car like the Mazda RX-8, this technology offers the most horsepower per displacement of any US-made naturally aspirated engine – It gives more power which you want.

Rotary motors have high speeds and can generate a lot of power in the right hands. They’re easy to modify, customize, and build, and you can do it quite cheap to make a fast car.

Rotary engines are used in racing cars or sports cars because they can handle an absurd amount of power.

But in addition to these advantages, the rotary engine also has a new disadvantage. However, in this reading, we will see 9 rotary engine cars of this type powered by a Wankel engine.

The Mazda RX-7 is, without a doubt, the most successful car with rotary engines in history. Launched in 1978, It was powered by an unconventional rotary engine, but it was also relatively lightweight, practical with its large rear glass hatch, and thoroughly modern.

The RX7 has a little 1.3-litre turbocharged 13B rotary that generates 189 hp. The RX-7 is one of the cutest cars to ever have emerged from Japan.

The Mazda gives you extraordinary looks at a very priceMan’sgives and backed it up with the kind of connected driving experience.

The RX-8 is an iconic and sought-after sports car from Mazda. Although it was launched in 2003, it still looks futuristic and stylish and has nice details.

Under the hood, there is a high-revving 1.3-litre centrifugal engine that is unique on the new car market.

Despite the four-door design, the RX 8 is a reliable and safe car. It’s one of the cheap cars with rotary engines you can buy, with many advanced safety features.

The NSU RO80 was a mid-size car that used front-wheel drive, came with a semi-automatic transmission, and had a rotary engine. It was one of the first cars with rotary engines to be mass-produced.

The car had a displacement of almost 0.9 litres but could produce 114 hp and 159 Nm of torque. The Ro80 was notably ahead of its time with excellent aerodynamics and had 115 hp.

It was powered via a three-speed synchromesh transmission with an electronically operated clutch and torque converter and was called a semi-automatic.

Thanks in part to the lightweight of the rotary engine, the NSU Spider weighed in at less than 1,600 pounds and helped the car reach a reasonable speed of 0-60 mph in 17.4 seconds, on the road at a top speed of 95 mph.

In terms of equipment, the NSU Spider was well equipped for the sports car standards of the time. The side windows were rolled up and made of glass, not thin clear plastic.

The two-door coupe design and vertically clad radiator grille had a strong American flair and were unconventional for a Japanese car.

This extraordinary feature that made this a comfortable luxury sedan also made it a capable GT car. With a great top speed of 158 mph, it was one of the fastest sedans of 1970.

The 1975 AMC Pacer was one of the smallest vehicles. It was an innovative car designed around GM’s upcoming Wankel engine.

The AMC Pacer had a checkered history as a seemingly future space-saving car to be powered by a rotary Wankel engine supplied by GM.

The Pacers were available with numerous upgrade options, including the X-package with bucket seats, a floor slider, and stabilizer, as well as modest equipment details.

However, Mazda engineers limited it to 650 bhp at 8,500 rpm to improve reliability and longevity. Today, Mazda and Wankel enthusiasts consider the car to be one of the most iconic racing cars in Japan.

The 787B was celebrated by all the major toy and model manufacturers inside and outside of Japan.

It was launched in 1973 and contains a famous rotary engine. The gentle power development of a double-rotor Wankel complements the legendary and luxurious ride quality of the hydropneumatic suspension of the GS hull.

With a torque of just 3,000 rpm, the engine was also the most powerful power unit ever offered in the GS, a car that was notoriously underpowered for its entire life.

There was also a more luxurious interior and flared fenders to set the Birotor apart from its younger siblings.

Mazda’s first fully electric vehicle is the rotary-engined MX-30, which has a sleek exterior and sleek cabin and is among new cars with rotary engines.

While the Mazda MX-30 is not a sports car, the inherent benefits of electric motors allow an electric vehicle to provide a fun and lively driving experience.

The MX-30’s cabin uses high-quality material such as cork and breathable fabric cushions made from recycled plastic bottles. There is enough space in the front seats for two American adults.

Which cars use rotary engines?

These are the top notable cars that use rotary engines making them unique apart from other engines:-

Do any cars still use rotary engines?

Rotary engines have high revs and can generate a lot of power in the right hands. They are easy to modify, customize and build, and you can do it quite inexpensively to make a fast car. Rotary engines generate a high amount of power so that it is used in racing cars.

Is the rotary or piston engine better?

Why are rotary engine cars not popular?

Rotary engine cars have low thermal efficiency due to a long combustion chamber and unburned fuel reaching the tailpipe. The emissions are low and the fuel economy is terrible and ultimately that is why it is not popular.

Without the influence of rotary engine cars, the automotive industry would not be where it is today.

We don’t use this technology as often as we used to, but there are still specific applications where it makes sense to install it in a vehicle.

If you are considering purchasing a Mazda or any other make and model with this technology, knowing the efficiency of that vehicle is paramount.

9 Honda Civic Competitors In 2022 That You Must Check