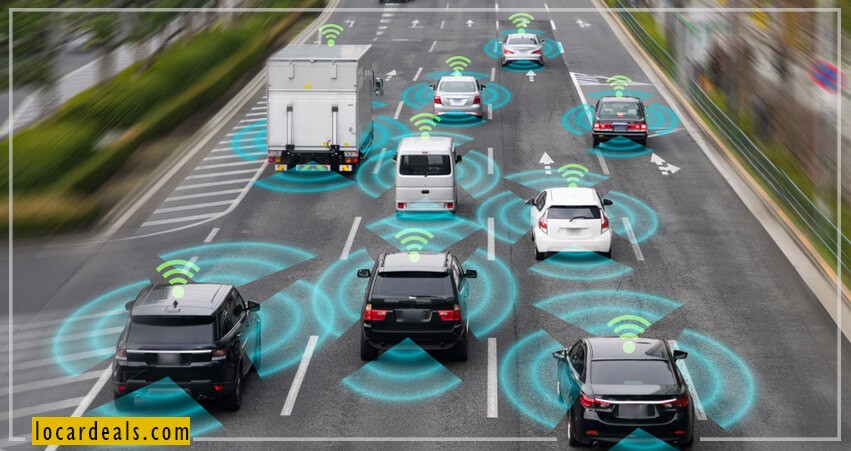 Experts are making big claims about the future impact of autonomous vehicles. Before they arrive, check out our complete guide to self driving cars pros and cons.

We have long thought of a self-driving car that fulfills our dream of driverless cars. In the coming years, this fiction will become a reality thanks to the robot car or the autonomous car.

Self driving cars are automobiles that do not require a human operator to navigate to a destination. They use cameras, sensors, and advanced software for interpretation.

5 Pros And Cons of Self Driving Cars

Firstly, We will learn the working and components of driverless cars. Then will discuss Pros and cons of self driving cars.

How Do Self Driving Cars Work? – A Complete Guide

The main goal of autonomous vehicles is to function properly without human assistance. To function, these cars use a combination of sensors, cameras, radar, and artificial intelligence (AI) to travel between destinations without a human operator.

Driverless cars use four components for working as follow:

As human drivers, we need to be able to see the environment around us, whether it’s looking ahead or reading street signs.

Computer vision is the way a car views its surroundings to identify objects in the car’s vicinity. We do this by using an image classification network called Convolutional Neural Networks.

Suppose the driver is stuck in heavy traffic. The driver knows this from the analysis of the environment, which corresponds to the idea of ​​sensor fusion: Sensor fusion is one of the most important components of self driving vehicles.

Fusion algorithms allow a vehicle to understand exactly how many obstacles there are, estimate where they are, and how fast they are moving.

Self driving car doesn’t know where or how to get from point A to point B. The location works like a GPS system on a phone in autonomous cars. Used to keep track of locations.

Route planning is used to determine the best route to take. Self driving vehicles use complex algorithms to get optimal routes.

Each component makes it a reliable luxury car.

Working Of Self Driving Vehicles

Autonomous cars create and maintain a map of their surroundings based on a variety of sensors located in different parts of the vehicle.

Ultrasonic sensors in the wheels detect curbs and other vehicles when parking. Sophisticated software then processes all of these sensory inputs, records a route, and sends instructions to the car’s actuators that control acceleration, braking, and steering.

Autonomous vehicles could become commonplace on US roads in the coming years, but we won’t know the full impact of autonomous cars until they are actually operational on our roads and rails.

What is clear is that this will have far-reaching implications for all types of people and industries. We’ve made a complete list of the potential self driving cars pros and cons, once they are rolled out.

Whilst we are a long way away from the roads being flooded with driverless cars, we took a look at the benefits a fully-driverless car could bring.

With over 90% of car accidents caused by human error, the introduction of driverless vehicles has the potential to make our roads much safer.

Many experts point to the remarkable safety record of modern aircraft to illustrate the safety potential of autonomous vehicles.

Flying is considered one of the safest modes of transportation, with one fatal accident for every three million large commercial passenger flights.

2. Accessibility for those who cannot drive

There are many people in the United States who are restricted in their mobility because of their age or disability.

With fully automated cars, driving licenses and exams will become unnecessary.  People who were considered dangerous to drive in the past have access to driving technology without endangering themselves or others.

You no longer have to drive to find a place to park. A driverless car could drop you off, find your own parking space, and come back to pick you up when you’re ready. This will save your wallet time and money.

Another important factor in the debate about the pros and cons of self driving cars is the environment. Self-driving cars are more likely to be electric than internal combustion engines.

In addition, the constant speeds at which autonomous vehicles will travel reduce the constant braking and acceleration.

Self-driving cars have the great advantage of not having to focus on what is happening on the road.

There is no danger of being too tired while driving because you can sleep while driving, perfect for long car trips.

These are some must known advantages of autonomous vehicles.

There are plenty of ways driverless cars could improve our lives. That said, there are some downsides. Following are the cons of self diving cars

As with all technological advances, piracy is an option. Self-driving cars could potentially be hacked to get the driver’s personal information, or worse, hacked to allow someone to take control of the vehicle’s steering or acceleration.

In addition to hacking, as with any technology, glitches are also a big problem. This is the most important point when weighing the self driving cars pros and cons

2. Loss of Driving Skill Over Time

Many drivers will have been driving for most of their lives and suddenly when they stop driving they could lose this well-developed skill.

If the driver has to take the wheel under certain conditions, he could overestimate his ability.

As with any new technology that has taken years to develop and manufacture, the cost of autonomous cars is likely astronomical at first.

There are some estimates that the cost could be in excess of $ 100 to $ 300,000. It will likely take time for the technology to develop enough to be available to the average American.

Those who depend on driving for a living could make their careers become unnecessary with the introduction of autonomous vehicles.

When examining the pros and cons of self driving cars, machine failures should be considered. While most agree that self-driving cars are likely to prevent more accidents.

it doesn’t completely eliminate the risk of accidents from machine failure. Even if the software or part of the vehicle fails, an autonomous vehicle could put the driver in greater danger.

The U.S. National Highway Traffic Safety Administration (NHTSA) lays out six levels of automation, beginning with Level 0, where humans do the driving, through driver assistance technologies up to fully autonomous cars. Here are the five levels that follow Level 0 automation:-

A level 0 car does not have any autonomous driving functions. Humans take over driving at all times. Basically, a level 0 car is not autonomous at all.

Model Ts were level 0 cars, if you were born in the 80s this was probably your first car. Until recently, most vehicles were realistically level 0.

Then comes level 1. If the car can control itself to a certain extent based on the information it gathers from its surroundings, it falls into this category.

Popular features like Lane Assistant when your car can help you get back on track if you skid a little. Many cars already have this technology.

The 2011 Jeep Cherokee had ACC, and Chevrolet introduced several models in 2015.

However, these are not fully autonomous cars, as the driver remains in control and must always pay attention to traffic. GM’s Super Cruise is a great example of Level 2.

Now we come to something really interesting. Level 3 vehicles can travel on a normal road and on a specific road according to a destination selected by the driver.

However, Level 3 cars are said to continue to have human drivers who can intervene immediately if something goes wrong.

Tier 4 vehicles can intervene if something goes wrong or a system failure occurs. With that in mind, for the most part, these cars require no human interaction.

However, a human still has the option to manually overwrite. Level 4 vehicles can be operated in self driving mode.

Full automation is the noble goal of the dream, which does not require a human driver. It could just be a passenger and is unlikely to drive at all.

If level 0 is the car you drive, then level 5 is the car which drives you.

What are the pros and cons of self-driving cars?

The pros of self driving cars like road safety, cheaper and safer public transportation, environment friendly and less insurance cost. There are some cons as well of self-driving cars, mainly security problems, job decline and decision making problems.

Which companies are working on a self-driving car right now?

But the best technology is available from Bosch and Mercedes-Benz and they are ahead in this technology of assistance for the driver and fewer drivers.

How do Google’s self-driving cars work?

The driverless car of Google is an epitome of what machine learning can do. It consists of radar, sonar, cameras,  Laser, control instruction and map for its working.

How safe are self-driving or autonomous driving cars?

The short answer is that none of today’s autonomous cars are safe in the sense that they can be operated full time without human supervision. None of these vehicles can perform reliably in all typical road conditions.

Safety, Safety depends on the ability of the vehicle control system (be it human or computer) to assess the current situation quickly and precisely and to determine the best way to avoid an accident.

Are self driving cars a good idea in USA?

Yes, Self driving cars are a good idea for more safety on roads and for being environmentally friendly.

As you can see from this review of the pros and cons of self driving cars, there is a lot of debate on both sides of the table. Self-driving cars may be the way to go, but there are still some major obstacles along the way.

Although it will take many years, experts predict that at some point autonomous cars will become the dominant mode of transportation in the United States and that human driving will be less common. While we don’t know exactly when it will happen, there is no question that autonomous cars are in our future.

GR86 Most Popular New Toyota Sports Cars 2023 Has To Offer

7 Best Luxury Hybrid Cars You Should Check Out In 2023