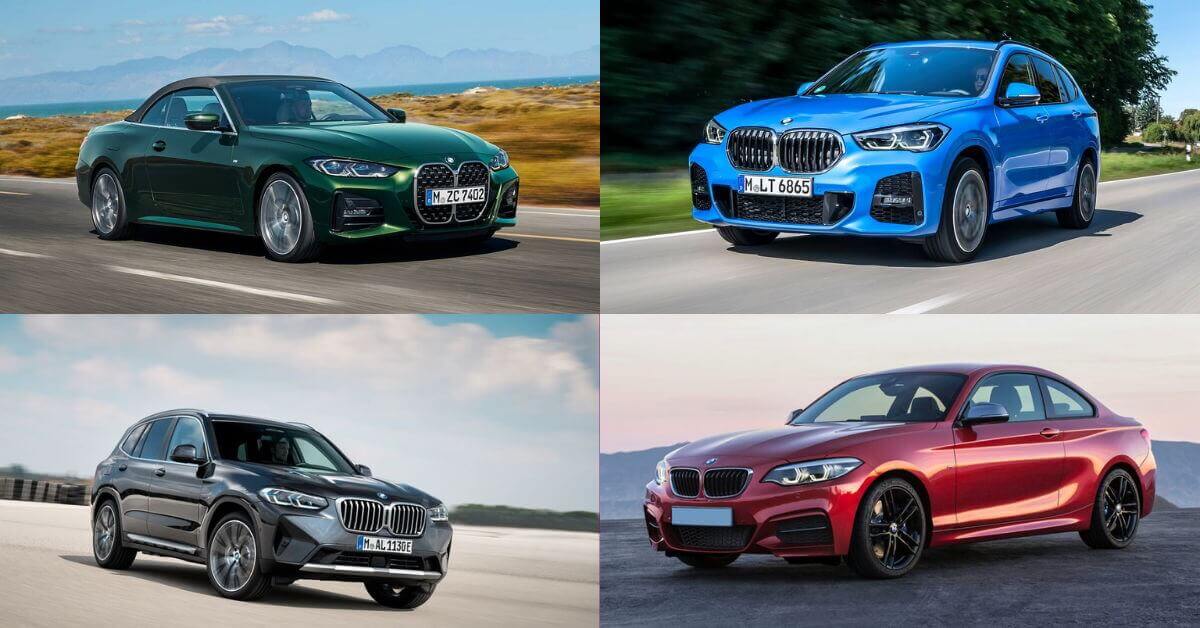 BMW is hailed for its robust engines, and one such most talked about is the BMW’s four-cylinder engine. 4 cylinder engines are not appreciated well enough as they are labeled as not so strong.

However, BMW proved it wrong by its successful vehicles that possess the same engine. Thus, today we bring you some of the best 4 cylinders BMW cars that we are sure you will love to know about.

Bayerische Motoren Werke AG or you can say BMW is a German multinational automaker well known for its luxury vehicles. BMW is stated as the pioneer of the modern automobile industry, and we can understand why.

The company is solely responsible for making many reforms in automobile technology. This is the reason why even after a century, the company is still going strong and is one of the biggest corporate manufacturers of automobiles.

BMW has been using four-cylinder engines in its vehicles since forever. Even today, when companies are moving on to bulky V8 & V12 engines, BMW is still keeping in touch with its V4 roots.

Thus, today we bring you some of the most popular BMW 4 cylinder car lists that you can buy if you desire a vehicle with a neat engine but at the same time be robust and no less than ordinary.

BMW does not go crazy with its exceptional work. So, when we say 4 cylinder BMW cars, we mean some exceptional models that have rooted well in the automotive market.

The company has been using its famous four-cylinder engines for over a long period, and some exclusive model lineups bear it.

Below is the list of those exceptional BMW 4 cylinder cars that you can buy in 2021 and enjoy a thrilling, luxury ride but with a little less weight at the front.

At present, it will not be entirely wrong to say that the majority of the cars that BMW is currently selling are powered by four-cylinder engines.

In 2019 BMW launches its new 600-HP 4-Cylinder Engine, referred to as P48. The new P48 engine holds the number of cylinders and displacement as its predecessors, but with the advanced engineering at its core, it is a perfect masterpiece of German engineering.

This all-new engine can produce 600 horsepower with 9,500 rpm and can support more than 36 pounds of boost from its turbocharger without breaking a sweat.

Longevity is the base concept behind BMW making this advanced engine so that it can last well on the tracks. The company expects the engine to last just over 3,700 miles between rebuilds, which is impressive for such a modest engine.

Most people still are skeptical about the 4 cylinder BMW cars. Well, sorry to burst your bubble, but BMW 4 cylinder cars do exist. They are not a new concept, but they have been in the market since forever.

Small size engines have been neglected since people & many makers believe that for the most power, speed, and thrill huge engines like V8, V12, etc., are needed.

But companies like BMW are proving such speculations wrong by their extravagant models that are powered by modest four-cylinder engines and still give a high rated performance.

Below we have listed the 6 best 4 cylinder BMW cars that are among the people’s favorite, and the new launches are real-time proof. So, let us have a look.

When talking about 4 cylinder BMW cars, the BMW 5 Series has to be on the top. BMW 5 Series is an executive car lineup that has been in production since 1972. And at present, it is in its seventh generation.

Since its first generation, the BMW 5 Series has been powered by different engines, including four-cylinder engines.

And at present, you can find various 5 Series models across various generations being powered by V4, V6, V8, & V10 engines that are either turbocharged or naturally aspirated. So, if you are looking for BMW 4-cylinder turbo cars, this might be the one.

Initially, the 5 Series was only made in sedan body style. But later, the wagon and 5 door fastback body styles were added to the production. Furthermore, since 1982 the diesel engines have been included in the 5 Series range.

Suggestion For Reading: Audi vs BMW vs Mercedes: Which Is The Right Luxury Brand For You?

The latest model that you can purchase under the series is the 2022 BMW 5 Series. It comes with a base four-cylinder engine that can boost standard 248 horsepower.

The vehicle offers eight trim levels, excellent fuel economy, lively engine performance, and abundant tech & safety features. You can make it yours for an initial price of $54,200.

BMW X3 is a luxury compact crossover sport utility vehicle that has been in production since 2003. The model is slightly based on the BMW 5 Series.

Suggestion For Reading: 11 Salient Questions to Ask When Buying A Used Car

At present, you can buy the latest 2022 BMW X3 model if you want to own a luxury ride with a compact engine. The 2022 X3 comes with a base 2.0 liter 4 cylinder engine that can produce up to 248 horsepower.

Get your hands on the 4 cylinder BMWs with the company’s 4 Series. BMW introduced the BMW 4 Series in 2014, and it is a range of compact executive cars.

The 4 Series was created when the company decided to take off the 2 door coupe model from its famous 3 Series and make it into a separate one.

The BMW 4 Series is now in its second generation. In both the generations of the 4 Series, you will find coupe, convertible, and 5 door liftback body styles.

The first generation was powered by inline turbocharged inline-3, inline-4, inline-6 engines that were either diesel or petrol.

Suggestion For Reading: 25 Best Selling Cars in the United States 2021

However, for the second generation along with these engine choices, a plug-in hybrid powertrain was introduced. The BMW 4 Series drivetrain layout is all-wheel drive or rear-wheel drive.

The latest 4 cylinder BMW that you can purchase under this series is the 2022 BMW 4 Series. It comes with a 2.0 liter 4 cylinder engine under its hood producing up to 255 horsepower and offering excellent gas mileage in its class.

If you want 4 cylinders BMW cars that come on the sides of affordability, then the BMW X1 is the ideal vehicle for you.

BMW X1 is the company’s dedicated lineup of subcompact luxury crossover SUVs. The X1 lineup made its way to the market in 2009 and currently is in its second generation.

The X1 is more appealing to a wider range of buyers due to its small compact size, enhanced efficiency, and affordable price.

The first generation of X1 is based on the BMW 3 Series and puts forward rear-wheel drive as the standard drivetrain with all-wheel drive as optional. BMW X1 is referred to as the smallest SUV in the company’s right after X3.

However, in the second generation, the company switched to the front-wheel-drive layout from the rear-wheel drive. X1 is the second smallest SUV produced by BMW.

So, if you are interested in this five-door SUV, you can go for the 2022 BMW X1. It comes with a base price of $35,400 and is powered by a 2.0-liter four-cylinder engine. You will get a spacious compact ride, refined handling, and a luxury interior.

Another model lineup came into existence because BMW wanted some changes in its existing lineup.

BMW wanted to spin-off the 2 door convertible and coupe models from its BMW 1 Series into a distinct one, and this is why the company launched the BMW 2 Series.

The BMW 2 Series is a range of subcompact executive cars that has been in production since 2014. In the beginning, the 2 Series was launched as a 2 door convertible and coupe. But from the next year, the 5 seats compact design was added to the lineup.

Suggestion For Reading: 11 Cheapest Cars With Gullwing Doors Under Budget

The second generation of the BMW 2 Series was launched in 2021 with both front-wheel and rear-wheel drivetrains.

You can choose the 2022 BMW 2 Series as your next 4 cylinders BMW car.

BMW 740e XDrive IPerformance is one of the popular luxury car models under BMW’s 7 Series. The 7 Series made its debut in 2015, and since then it has been channeled by various four-cylinder, six-cylinder, eight-cylinder, and twelve-cylinder turbo and twin-turbo engines.

The 2019 BMW 740e XDrive IPerformance is the luxury car under the 7 Series that is quite popular for its compact yet powerful four-cylinder engine.

The model comes with a 2.0-liter four-cylinder engine under its hood producing a whopping 322 horsepower. This is a hybrid model. Thus, you can switch as per your preference.

Suggestion For Reading: Top 9 Pontiac Sports Car Models of All Time – Why Did Suspend?

YES. BMW has been making 4 cylinder cars for over five decades now. The company has produced some very fine models that hold a neat V4 engine under their hood.

Not only this, there are various 2022 released or upcoming models of BMW that boast the four-cylinder engine.

Is a 4-cylinder BMW fast?

Where there is a BMW, it is all about luxury and speed. You can pick up any four-cylinder BMW, and you will notice that almost every single one of them offers good top speed and acceleration for such a modest engine.

Currently, the 2022 BMW 530i which is a model from the company’s 5 Series is powered by a 2.0-liter 4-cylinder engine that can produce 248 horsepower and can attain a top speed of 155 miles per hour.

Is a 4-cylinder BMW good?

Yes. If you are a BMW enthusiast who wants to feel the luxury and competence of the brand but doesn’t want to own a bulky ride, then the 4-cylinder BMW is a good option for you.

What are the best 4 cylinders BMW cars to buy?

If you want to buy the best BMW cars with strong four-cylinder engines then you can opt for famous model lineups as mentioned below:

4 cylinder BMW cars are just as good as any other engine-powered model of the automaker. You can have a luxury ride with you that offers deft handling, powerful engines, and costs way less than those so-called power beasts.

The article covers the BMW model lineups that offer 4 cylinder engines, and we hope you like the read.

The 9 Cheapest Luxury Cars To Maintain of 2021