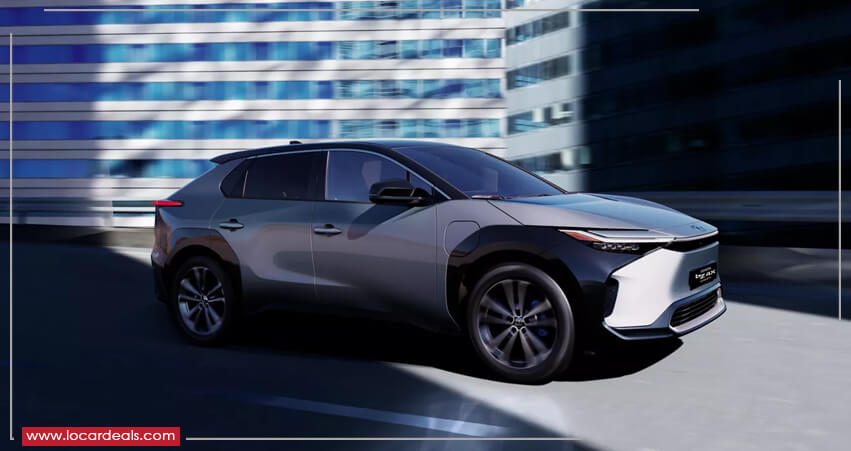 Toyota Electric Cars 2022 launched their first model in the ev series bZ4X SUV Crossover. Toyota is the biggest automobile company, but being at the top does not always get you praise. Toyota has been criticized for over a long time for not being able to compete in the electric car market.

However, with the unveiling of the concept of its 2022 upcoming electric car ranges, Toyota has put a stop to all the criticism.

The company has proclaimed that it will release a series of zero-emission battery electric vehicles, and it has revealed its forthcoming Toyota electric cars 2022.

This Japanese car manufacturer has long been known for its highly reliable cars, and we have no doubt we will see such high standards in their upcoming models as well.

More Popular For You

Toyota has announced that it will develop a huge line of electric vehicles by 2025. The company aims to introduce 15 BEVs that include seven Toyota BZ models, which stands for Beyond Zero.

In February 2021, Toyota announced that it would debut three electric vehicles in the United States by the end of 2021. Out of the three, it is said that the two models will be fully electric, whereas one would be a plug-in hybrid.

Toyota is making a huge comeback in the electric vehicle line with the launch of its 2022 Toyota bZ4X crossover.

The car comes with edgy styling that is bound to be an eye-catcher. The company has decided to make this model available for sale in all of its dealerships across the US.

We know it is hard to believe as all the electric vehicles that companies have offered earlier like the RAV4 EV, were only available in the selected dealerships.

However, this is not going to be the case with the BZ line. The company has only announced the bZ4X model so far, but it has assured that it plans on creating a huge lineup under the BZ name.

Any information regarding the pricing of this upcoming SUV is not disclosed by Toyota. Not only this, there are no details as if how many trim levels will be made available to customers.

Speculating the former electric produce of the company, we have a hunch that the pricing for a base trim of bZ4X can begin around $30,000 going up to $40,000 for the highest trim.

We have no further details on the vehicle but as soon as we know more about the pricing, trim levels, features, etc., we will update this article with all the crucial details.

The bZ4X Toyota electric cars 2022 is claimed to be a medium-size sports utility vehicle by Toyota. There are not many details disclosed about its powertrain only that it will have an all-wheel-drive system which shows Toyota’s dedication to delivering better mobility.

We will learn more about these details once the launch date is approaching.

The vehicle boasts to have a long wheelbase frame for a spacious bZ4X Toyota electric cars interior. The pictures released by Toyota give the idea of how the model holds futuristic design.

It will have a large infotainment system, a digital gauge display, and a wide centre console in between the front row seats.

The spacious cabin is just like the one with RAV4, but whether it will be comfy or not, that is a talk for later.

Not only this, but the vehicle also boasts an on-board solar charging system which only makes it more efficient than the rivals.

For More Details About

You will have to wait a little bit longer. As soon as we have all the information on all the features of the car, you will find it all updated here.

To be sure to not miss any details on Toyota electric cars 2022 lineup, subscribe to us to be updated.

In February 2021, Toyota announced that it is bringing its new line of electric cars that the company will start selling in the model year 2022.

Is Toyota coming out with electric cars?

YES. The upcoming model year is when Toyota’s electric cars will hit the automobile market.

How much will Toyota BZ cost?

Toyota has not officially released the cost for its BZ models. However, we anticipate that the price range can be between $30,000 (for base trim) to $40,000 (for highest trim).

Does Toyota own Subaru?

No. Toyota does have a little stake in Subaru, but it does not own it. Subaru is owned by Fuji Heavy Industries.

Is it worth buying an electric car?

YES. Electric cars are more environment-friendly, plus they are the future of the automobile industry.

Should I buy an electric car or a hybrid?

In our opinion buying an electric car instead of a hybrid is a wise decision. Electric cars are eco-friendly, money savers, and provide a longer electric-only range.

Whereas a hybrid car uses fuel, are more expensive to maintain, and their electric range is poor.

What is the Toyota 2022 model’s release date?

There is no official date released by Toyota for the launch of its Toyota electric cars 2022. However, we only know that the model will be out in the dealerships in the upcoming model year.

NO. Toyota is trying to form a balance between producing gasoline and electric cars. To be honest, Toyota is far behind completely switching from their current turf to all-electric. It can be possible in the coming years but not at present.

Is The New 2022 Toyota Supra Worth Buying?

Top 9 Difference Between Hyundai Santa Fe And Tucson in 2022